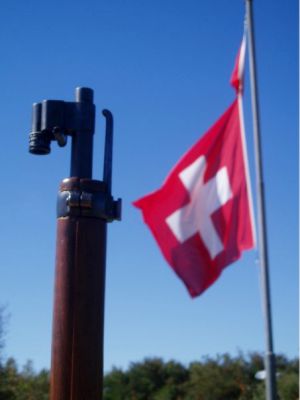 The history of sport shooting in Switzerland

Since the 19th century, Switzerland's current defense force has mostly consisted of a militia army rather than a professional army. Every able-bodied male is obligated to serve in the Swiss army, beginning with basic training at the age of 19 and followed by short annual training camps for more than a decade after that.

As a result of this system, every male citizen is permanently equipped with a firearm which he must use at least once a year at a compulsory "Obligatorisch" shoot. Because of this requirement, many shooting ranges can be seen all over the Swiss countryside.

Throughout Switzerland's history, we have had to learn to survive and defend our tiny nation amongst the mountains and valleys of our alpine terrain. These conditions required that we become familiar with shooting over longer distances rather than engaging in close-quarters fire fights. As a result, standard Swiss rifle shooting activities tend to take place on longer ranges than in other parts of the world.

The sport of target shooting is hugely popular in Switzerland, made possible by the numerous shooting ranges present all over the country.

What is the Swiss Rifle Club?

The Swiss Shooting Federation is an organisation that governs 3000 sport shooting clubs in Switzerland. Also under this organisation are thirty-nine Swiss Rifle Clubs around the world, catering primarily to Swiss expats living in their respective countries. Throughout each year, the clubs that are affiliated with the Swiss Shooting Federation compete against each other indirectly through stringent shooting programs, score sheets and regulations, making for a fair and controlled competitive environment. Medals are often available to the marksmen who achieve a qualifying score.

In line with the regulations of the Swiss Shooting Federation, we shoot with specifically regulated Swiss military rifles, using only peep sights at a distance of 300 metres, and mostly shot from a prone position.

Every five years, the Swiss Rifle Clubs from around the world come together in Switzerland to meet and compete against each other directly.

The Swiss Rifle Club Johannesburg was originally founded in 1955 by Swiss shooting enthusiasts who had emigrated to South Africa. Some of these founders are still members of our club to this day, as senior veterans.

At the Swiss Rifle Club Johannesburg, we follow a specific shooting calendar that is determined by our committee at the beginning of each year. Each month, we take part in one or more shooting programs as planned, and all of these programs follow strict regulations in the interest of fairness and safety.

All of the rifles that we use must conform to the rules of the Swiss Shooting Federation. Only three models are accepted in our competitions:

While some of our members do privately own some of these rifles, those who don't are able to make use of our licensed club rifles.

The Swiss Rifle Club Johannesburg relies on the cooperation of the people who attend in order to keep our shooting activities running smoothly. Every time a marksman shoots, he depends on two assistants; one who sits with him and assists with spotting and recording the scores, and one who is stationed at the targets 300 metres away, indicating the scores to the firing line using a system of colour-coded wooden paddles.

Our range masters ensure that all marksmen on our range shoot responsibly. As a result, we have never had an incident in all of our 59 years as an established club. All visitors to the club must be introduced by an active member, ensuring that there is a level of accountability and responsibility for new shooters. Additionally, all new shooters must fill in an indemnity form and undergo a session on the range with our dedicated coach in order to be familiarised with the correct and safe use of our specific Swiss rifles. Please note that the Swiss Rifle Club Johannesburg is not a training entity.


Who can become a member?

As an official sport shooting club of the Swiss Shooting Federation, The Swiss Rifle Club is bound by an official club constitution, in line with the purpose of the club. As such, we must maintain a minimum percentage of Swiss membership.

While we do have some valuable South African members, the majority of our members are, and must be, Swiss citizens. These tend to be a mixture of expatriates from Switzerland, and second- or third-generation Swiss citizens born in South Africa.

Our members join us from as far as the greater Johannesburg area, Pretoria, and even the Lowveld. There are no geographic restrictions governing our membership.

If you are interested in joining us on the shooting range to discover your forefather's competitive and rewarding sport of target shooting, please don't hesitate to contact us.